Chances are that you have heard of Alzheimer’s disease. But, do you know the man after whom this memory robbing disease is named? 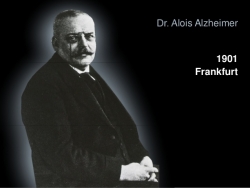 Alois Alzheimer was born on June 14, 1864, in the small Bavarian town of Marktbreit, Germany. He excelled in science and attended the Universities of Berlin, Tübingen and Wurzburg, where he graduated with a medical degree in 1887. His parents had taught him that the strong look after the weak, and he set out to dedicate his life to do just that.

In 1888, Alzheimer began his residency at the Hospital for the Mentally Ill and Epileptics in Frankfurt, Germany, where he studied psychiatry and fed his passion of neuropathology.

In 1901, Alzheimer met Auguste Deter, a 51- year-old woman with strange behaviors and increasing short-term memory loss.  Her condition rapidly deteriorated into severe dementia, and she would become the doctor’s obsession over the coming years.

In 1906, Auguste Deter died, and Alzheimer had her records and brain brought to his lab in Munich.  During an autopsy, Alzheimer identified a number of pathological conditions, including shrinkage of the cortex and the presence of neurofibrillary tangles and neuritic plaques.  The plaques and tangles were distinctive enough to warrant a diagnosis of senile dementia, which later became know as Alzheimer’s disease.

On July 16, 1912, King Wilhelm 2 of Prussia appointed Alzheimer professor of psychiatry at the University of Breslau.  Though Alzheimer suffered from quickly deteriorating health, he devoted the last three years of his life to research and clinical work.  Alzheimer died in Breslau, Poland of December 19, 1915, at the age of 51 from heart failure.

5.2 million people are currently living with Alzheimer’s disease and by 2050 that number will rise to an estimated 14 million.  We are thankful for the work of Dr. Alzheimer’s and all of the doctors who are currently working hard to find the cure for this disease.