Mr. Charles is a 90 year old man living with a myriad of diagnoses and is still very much in love with life. His kind and gentle, yet strong nature draw people in to learn more about him, to glean wisdom and to simply be in the presence of such an honorable man.

Mr. Charles bravely served our country through the Navy during WWII.  Due to racism and the deep cultural divide in our country at that time, he walked away from his service with a mere picture of himself in uniform. To this day he may weep when asked about his time in the Navy, telling stories of losing friends right before his eyes.

Since WWII, Mr. Charles has carried on with day to day life. He worked extremely hard, successfully raised seven children and has ‘too many to count’ grandkids.  He even has great-great grandchildren! He has given everything for his family and for his country and has never asked for anything in return.

As we at Joy’s House get to know our Guests better we ask their families if their loved one could have any wish granted, what it would be? Mr. Charles’ family let us in on his quiet and humble wish…to be honored for his service in WWII.

Through the Twilight Wish Foundation, we were able to submit this request on his behalf. It was just a handful of days later when Dick Hovermale, a volunteer for Twilight Wish, reached out to us with great news! Mr. Charles was going to be honored and honored well!

First, Mr. Charles went to the Memorial Day Service held at the WWII Memorial Park as an honored guest of Congresswoman Susan Brookes. He sat front and center with his adoring daughter and caregiver, Alisha.  Every single person in attendance was moved to tears and left with an even stronger sense of respect and admiration for those who have given their lives for our country and for our freedom.

Twilight Wish didn’t stop there! Mr. Charles was interviewed by CBS 4’s Debby Knox, where she presented the surprise that he would be riding in his dream car the Ford Mustang in the July 4th Carmel Fest Parade with friends and family by his side.

On July 4th, the parade was lining up and Mr. Charles was already the star! Family, news crews, Colts cheerleaders and regular strangers all made sure he knew how grateful they were for his service.

During the parade, the car had banners stating Mr. Charles’ brave actions and he was verbally recognized to the thousands of people in the crowd.

He made many new friends that day as people shook his hand, embraced him and thanked him for being such an intricate part of why we have so many freedoms today. With gentle tears in his eyes, he said to each and every one, ‘You are welcome’.

Thank you to Twilight Wish Foundation, CBS 4 and Dick Hovermale for facilitating this beautiful tribute to a great man.

Mr. Charles, it is a true honor to know you and to be able to spend time with you on a regular basis here at Joy’s House. We are blessed by your presence and every day that we get to do even the simplest of things in our lives, a part of that is because of your courageous service. 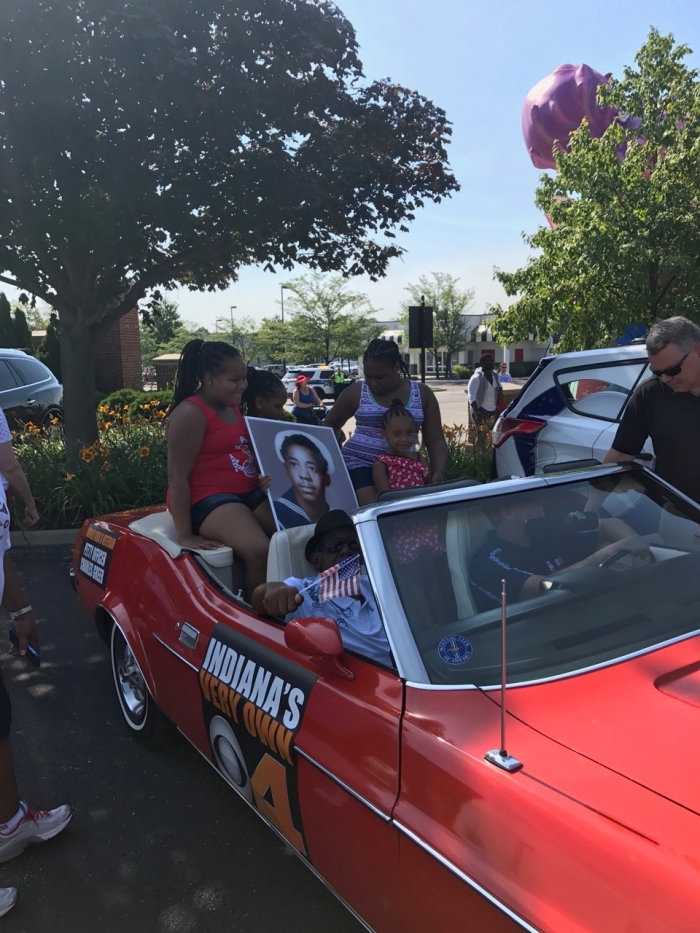